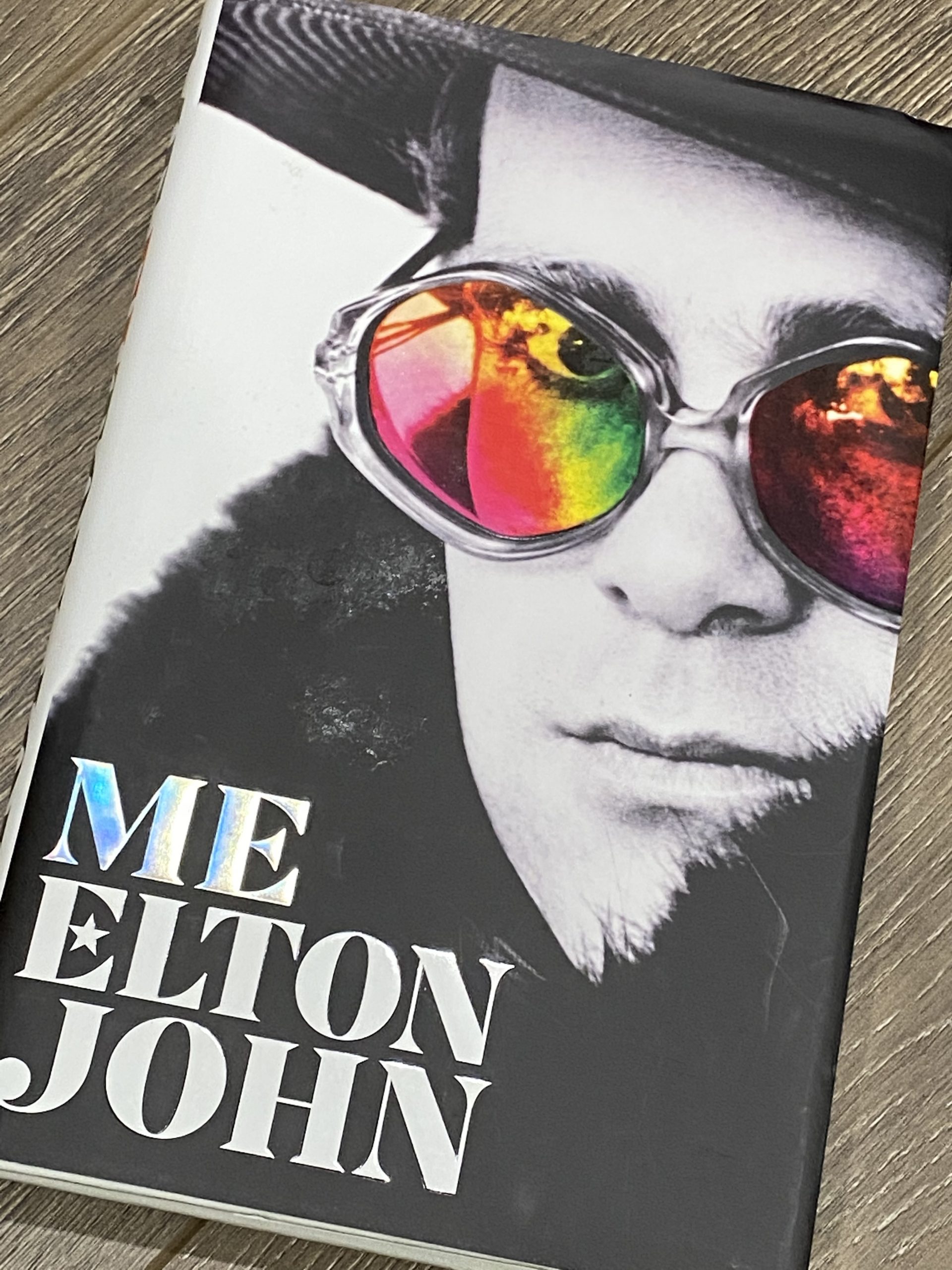 Elton John could not have picked a better title for his book – Me is simply him, laid bare from start to finish. It is the story of the rise and roller coaster life of Reginald Dwight, the world famous and accomplished singer and musician we’ve all come to know as Elton John. But it’s more than that. It’s a warts and all introspective look at his talent as well as his many flaws. This isn’t a sanitised version of his life and it certainly keeps you turning the page.

Behind the Scenes
If you’re a fan of Elton, or at the very least appreciate what he has achieved in the music world, Me gives a great insight into how that whole world functions. From playing gigs as an unknown in questionable pubs to writing music and reaching the dizzying heights of fame, playing in huge, packed out stadiums.

One of my favourite parts of the biography is the story of how Elton came to work with Bernie Taupin. I’ve always thought they were an incredible collaborative duo. It is clear that Elton has a deep respect for Bernie and even though they are just friends, their relationship is as close as any two blood brothers could have. I’m fascinated by “sliding door” moments and their meeting was exactly that…an envelope handed to Elton with some lyrics as “an afterthought, or a consolation prize” after being rejected by a record company. That moment may possibly have changed the course of Elton John’s life. Bernie’s lyrics and Elton’s music were a match made in heaven – and each hit song seems to have been effortless.

Early Life
The biography also gives us an insight into Elton’s very complex relationship with his parents. But it’s not done in a “woe is me” kind of way. It’s honest and raw and quite perceptive. Elton writes of his parents, “They were both stubborn and short-tempered, two delightful characteristics that it’s been my huge good fortune to inherit.” The book is littered with examples of Elton’s stubborn nature and temper. He doesn’t try and make excuses for his poor behaviour but owns it and often expresses regret for it.

Fans of Elton also know him as being quite flamboyant. A trait he obviously did not get from his parents. He details many instances of mind-blowing credit card blow outs. One such purchase saw him take possession of an old Melbourne tram which then had to be shipped from Australia to Britain. Yet, with great insight again, he recognises that all his material possessions don’t deliver happiness.  “I don’t need a psychiatrist to tell me that material possessions aren’t a replacement for love or personal happiness. I’ve spent enough miserable, lonely nights in houses filled with beautiful things to have worked that out for myself a long time ago.”

Addictions
Like every other part of his story, Elton is quite honest about his addictions – a severe cocaine addiction that almost killed him, an alcohol addiction that destroyed relationships and a food addiction that led to bulimia. He owns all these issues in his life and is very honest about the moment (an intervention of sorts) that finally made him seek help. Granted he says he then became addicted to going to meetings about addiction. But like everything else in his life, Elton didn’t do anything by halves. Once he decided to get help, he got help. And then used his knowledge to help others. It’s quite a sobering read to be privy to his thought processes through these periods of addiction.

Gossip
I hope I haven’t given the impression that Me is all doom and gloom with heavy subject matter. Elton deals with the light and dark in equal bouts of self-deprecating humour and reflection. If he thinks he was an arsehole, he says it. If he thinks the other person was the arsehole, he will tell you that as well.

I love that the book is littered with anecdotes about some of the biggest celebrities – (in no particular order) John Lennon, Freddy Mercury, Bob Dylan, Elvis Presley, Rod Stewart, the Beach Boys, George Michael, Gianni Versace, Eminem, Lady Gaga and half of the British royal family to name but a few. These encounters are funny, loving, tragic and insightful. They are the sort of anecdotes that a person wants to hear when reading a celebrity’s biography. It means you get more than just Elton John – you get all the no holds barred gossip about others as well.

Happiness
By biography’s end you get the sense that Elton still has plenty left in the tank. It isn’t the end of the story. But there is a sense of contentment. A sense of a life well lived, even after wrong turns and disasters. One gets the sense that Elton has finally found happiness – a loving marriage and a new role as a doting and loving dad. Who knows what the future will hold for this kid who started life in the north-west London suburb of Pinner and rose to such lofty heights in the entertainment world? One thing is certain – he has stamped his presence in the world and his journey has been a roller-coaster ride. One that you will be so glad he shared.